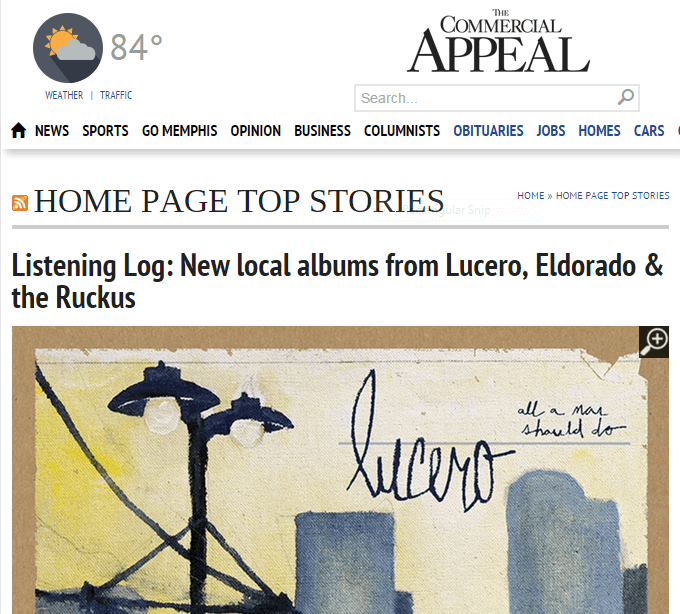 We pay extra attention when something comes out from our hometown of Memphis.  This article is definitely worth a quick read:

“All a Man Should Do”

Available today (Sept. 18), Lucero’s “All a Man Should Do” is the veteran Memphis band’s ninth full-length studio album in a career that’s now pushing toward a second full decade. And it feels like it represents a transition, or maybe a culmination of one begun with the band’s previous collection of new material, the acoustic-inflected 2013 EP “Texas & Tennessee.”

The addition of multi-instrumental ace Rick Steff on 2006’s “Rebels, Rogues & Sworn Brothers” inaugurated a three-album cycle where Lucero transformed from an alt-country bar band to a more expansive, all-encompassing Southern roots band, with piano, horns, pedal steel and more. But “All a Man Should Do” feels almost like a response to that album’s title and the boozy romanticism that was required for alt-countryish bands of Lucero’s era.

Thematically, the new album is almost a straight line, from yet another busted-hearted musical break-up for frontman Ben Nichols (“Baby Don’t You Want Me”) into a new relationship whose contentment feels more profound, rendering past love songs’ depictions of romance, lust and infatuation into a kind prelude. If you thought Nichols had worked all the love song angles already, the gentle, soul-rooted “Throwback No. 2” opens a new door: “Let’s write it in the sky/We’ll make my mother cry/Come on now marry me.”

“All a Man Should Do” isn’t a sobriety album on the order of Jason Isbell’s recent “Southeastern,” but it is something of a sobering up, settling down album. “The Man I Was” (“None of those young girls could understand/How slowly killing oneself takes a toll on a man”) and “I Woke Up in New Orleans” (“I couldn’t out drink anyone for nothing/But I’d act like it till I puked or passed out”) take direct aim at a hard-partying past. Meanwhile “Young Outlaws,” with its sardonic Marshall Tucker Band-referencing intro, is a celebratory goodbye to a rowdy times (“Tell all the young outlaws/I’m hanging up my guns/I’m not taking the fall”) that has a naming-names specificity that feels deeper than artistic license.

This third straight album recorded locally at Ardent — the title comes from Big Star’s “I’m in Love With a Girl,” covered here as both label/hometown tribute and thematic master statement — sounds like it could have been a major radio record 25 years ago, sharing time with U2 and Tom Petty on playlists in an era where rootsy, adult rock music still counted as Top 40 material.

I’ve followed Lucero since close to the band’s beginning, and have marveled in recent years at the musical command they’ve developed. At first blush, “All a Man Should Do” sounds like a step back. But what’s unusual about it is that it’s at once perhaps the band’s most studio-polished album and its most relaxed. All of the elements that have expanded the band’s sound in recent years are still there, but those flourishes don’t announce themselves as fully. They aren’t even flourishes, but now just embedded deeply in the band’s sound, which is dense and rich in a way that doesn’t really grab you on a first listen but is durable. Kind of like the brand of romantic contentment these songs pursue. — Chris Herrington