Thoughts From Hearya.com About Our New Album – Lucero

Thoughts From Hearya.com About Our New Album 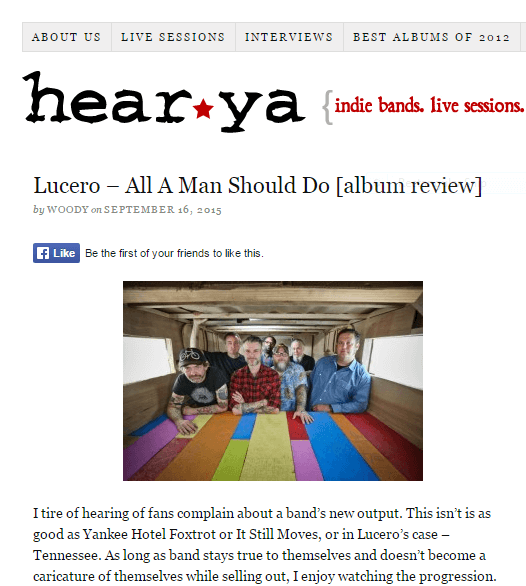 We really like this review from Hearya.com. Thanks for the nice words, Woody.

I tire of hearing of fans complain about a band’s new output. This isn’t is as good as Yankee Hotel Foxtrot or It Still Moves, or in Lucero’s case – Tennessee. As long as band stays true to themselves and doesn’t become a caricature of themselves while selling out, I enjoy watching the progression. Let’s call that the Robert Plant vs. Mick Jagger dynamic. And while certain efforts might warrant more praise than others, I wouldn’t want the band to just spend the rest of their days trying to recreate something that can’t be recreated.

All that leads me to Lucero’s latest effort, All A Man Should Do – a title that comes from a lyric in Big Star’s legendary track, I’m In Love With A Girl. A track that Lucero covers on the album, with Big Star’s Jody Stephens lending some background vocals to boot. Over the last two albums, Lucero has really explored the Memphis soul sound with horn accompaniments that for the most part lent the music a fresh new sound, almost becoming a rock ‘n’ soul revue. For All A Man Should Do, the horns were toned down a bit and the melodies were emphasized.

The album consists of 10 track of mid-tempo rock that feels like it should be played live while the band all sit on stools. And while it may lack some of the bite of Lucero’s earlier stuff, it is in no way lacking in quality. And holding it all together is the whiskey-soaked rasp of Ben Nichols. Nichols’ vocals have always been the voice of an old soul and on an album that seems to be full of reflective moments, he couldn’t sound any better.

The first half of the album is the storm, the difficult times in Nichols’ life. Lead single, Went Looking For Warren Zevon’s Los Angeles seems to be a trail looking back at some of life’s decisions that took you from home looking for change and adventure, but in the end you realize that home is where you belong. A couple tracks later a ballad, I Woke Up In New Orleans, is built around Rick Sheff’s piano. It is beautiful song full of regret, complete with a subtle mournful horn section.

The latter part of the album represents the rising, including the Big Star cover which is fantastic. They Called Her Killer sounds like a fleshed out tune off the excellent Ben Nichols EP, The Last Pale Night In The West, where the protagonist finds himself head over heels for a new love. And the closer, Me & My Girl in ’93 looks back at a time in life where love seemed so much similar; “its us against the world.”

Lucero entered into that warm blanket phase a few years ago. By that I mean that they became one of those bands that I equated to a safe haven – never disappointing and always enjoyable. I look forward to their new releases and tour. Will they ever reach the pinnacle of This Mountain / Sing Me No Hymns / The Weight of Guilt (a better three song run I don’t know)? I can’t answer that question but they will always have a place carved out in my soul. And for that I am thankful.