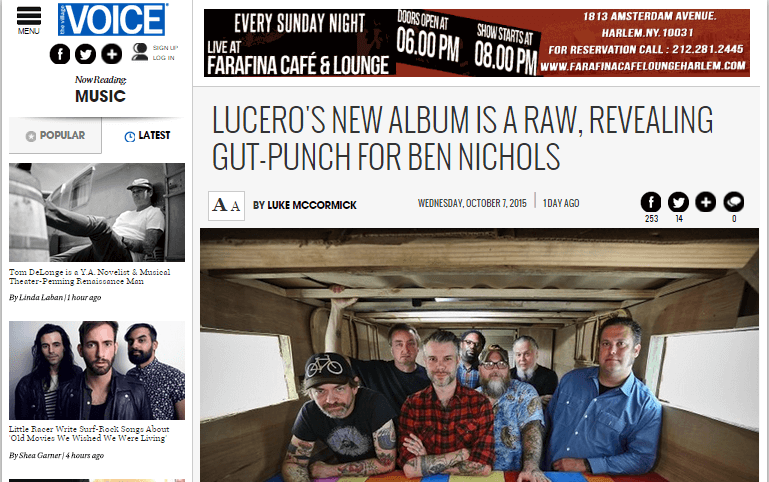 “I think at that point in my life I just needed a punch in the gut and that’s how some of these songs ended up on our record.” – Ben Nichols

Ben Nichols and his band Lucero have been touring for twenty-plus years, but the jaunt they just embarked on has the frontman feeling a bit shaky.

The heartbreaking Memphis country punks have just hit the road behind their eleventh long player, All A Man Should Do, and it’s the album’s more “nuanced” vibe that has Nichols a bit worried for how crowds are going to react. For the first time in his career Nichols played strictly

‘When you’re playing loud and fast, it’s a little easier to pull through anything because you can get drunk and turn it up…’

acoustic guitar on the record, so for a band known for drunken, ass-kicking live experiences, it makes sense he take heed.

“When you’re playing loud and fast, it’s a little easier to pull through anything because you can get drunk and turn it up,” the raspy-voiced frontman says, calling in from his Memphis home. “I don’t get too nervous before a tour anymore, but I’m feeling anxiety with this one. It feels a bit like going back to where we started from musically, which is scary but also exciting.”

All A Man Should Do is the third album in a row the band has recorded at “old school” Memphis studio Ardent Studios. Lucero’s previous two albums focused more on a horn- and keyboard-heavy Memphis sound, so with the new one they were looking for a bit of a different sonic direction. The songs Nichols had been writing at that point in his life dictated more of a somber — or “nuanced,” as he puts it — approach.

“There are a couple songs that could have been on the last two records, but in the recording process we were molding songs into the appropriate vibe we were going for,” he says.

So, there was a sonic consciousness in the studio, but like most good art, many of the new songs were born from a rocky relationship. For Nichols it was a doomed one with a woman out in Los Angeles, far from Memphis and his roots.

“I had been in a relationship with a woman in L.A. and, yeah, unfortunately that did not work out. A lot of the more heart-wrenching stuff and the record’s sound comes from that,” he says about his time out west. Some of this seeps into “Went Looking For Warren Zevon’s Los Angeles,” as Nichols says he was revisiting the late great singer-songwriter’s music, grabbing a margarita at a California hotel Zevon might have mentioned and maybe a few more drinks to cap those evenings off.

These nights were the catalyst for the album’s more soul-baring moments, where he says his writing skewed a little more personal than usual. The music dictated that, but he needed to write that way on an emotional level, too.

‘I think at that point in my life I just needed a punch in the gut and that’s how some of these songs ended up on our record.’

“With a song like ‘I Woke Up In New Orleans’ it’s a little less subtle than I’d prefer. It’s got some lines in it that are pushing what I’d like to share, but I felt like I had to take a chance with it,” he says. “I think at that point in my life I just needed a punch in the gut and that’s how some of these songs ended up on our record.”

Those gut-punches and moving on from the rough relationship have been positive for Nichols, he says, as well in aiding his “Does this guy gargle with gravel?” vocals.

“The voice has been just fine lately,” he says. “That relationship is over so I’m not staying up in bars drinking and smoking myself to death quite as much [laughs]. I’m thinking I’ll be ready to go for these shows.”

The voice is good for the upcoming tour, but Nichols these doubts about the new tunes and revealing a bit more of the heart on his sleeve than he’s accustomed to remain. In the end, the band’s loyal fan base is giving him some respite as he believes they’ll ultimately be accepting of Lucero’s new wrinkles.

“Older fans will be in the mood to hear that earlier, quieter Lucero, and I think the new fans will be down as well,” he says. “I have faith people will be open to hearing both sides of us. Whatever happens, it’s going to be different but fun!”