Album Stream: ‘All A Man Should Do’ – Lucero

Album Stream: ‘All A Man Should Do’ 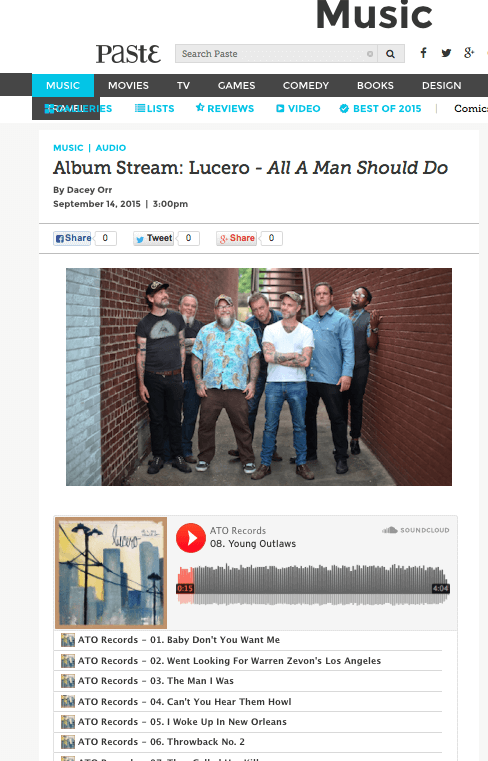 ‘All A Man Should Do’ is available to stream!  Big thanks to Paste Magazine for the article!

“Lucero has built a sturdy and emphatic following over the years, thanks largely to their raucous live shows and strong storytelling. This week, the band is set to release All A Man Should Do, their full-length and first studio release since 2012’sWomen and Work.

“I’m not sure if it was a conscience effort or [if it] just happened, but we’ve been wanting to get back to the older prettier sound,” said guitarist Brian Venable of the more acoustic direction the band has taken in this latest effort. The record was recorded at Ardent Studios in Memphis with producer Ted Hutt, who worked with the band on their previous two records and has also produced albums for Flogging Molly and Old Crow Medicine Show.

“I like the ideas of trilogies,” said Venable. “Once we break in a producer and learn how each other communicate, it becomes easier to work together.”

While an impressive collection of new original numbers on the album showcase Ben Nichols’ continued growth as a songwriter, All A Man Should Do also includes Big Star cover “I’m In Love With a Girl,” featuring Big Star drummer Jody Stephens.

“We are part of Memphis, and they are definitely a part of Memphis history,” said Venable. “We had never done a cover song on a record before, and it just seemed to make sense—especially with the sounds we were experimenting with on the new record. Jody was stoked to be apart of it. Recording at Ardent, he was always poking his head in to listen and say hey.””