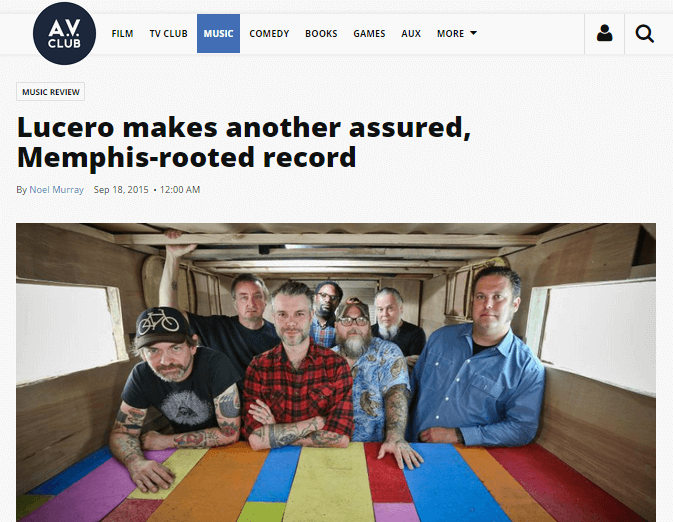 Album: All A Man Should Do
Label: ATO Records/Loose Music
How has it taken this long for Lucero to record a song called “Went Looking For Warren Zevon’s Los Angeles?” Like Zevon, Lucero’s singer-songwriter Ben Nichols works within a country-rock style that favors ballads as much as rave-ups, with simple melodies that are sneakily catchy. And Nichols too has a Zevon-like way of shifting almost imperceptibly between colorful fiction and stark confessional. “Warren Zevon’s Los Angeles” is the second song on Lucero’s 10th LP, All A Man Should Do, and it’s a moving mix of reportage and self-reflection, with Nichols singing about what he’s seen out in L.A. (the Troubadour, Harry Dean Stanton, Dan Tana’s, “a sea of lights”), as though he’s wondering whether he has a right to claim any of those images and characters as his own. It’s a powerful, pardoxical piece: assured in its humility.

The title of All A Man Should Do comes from the Big Star song “I’m In Love With A Girl,” which is covered on the album. (Which raises another question: How has it taken this long for Lucero to record a Big Star cover?) The version here expands on Alex Chilton’s acoustic take, adding drums, piano, background singers, and twangy guitar. It also features back-up vocals by Big Star’s Jody Stephens, and, like the original, was recorded in Memphis’ Ardent Studios. In way, “I’m In Love With A Girl” is a bookend for “Went Looking For Warren Zevon’s Los Angeles,” clarifying that being a Memphis band comes with its own legacies and opportunities.

“I’m In Love With A Girl” is also one of only three songs on this 1o-song album that clocks in under four minutes. From the five-minute, midtempo opener “Baby Don’t You Want Me” on, All A Man Should Do frames a mellower Lucero: one that trucks along steadily rather than rushing in and out. Aside from the Rolling Stones-influenced “Can’t You Hear Them Howl,” and the fast and funky “Young Outlaws”—two of the few songs that sport the horns that have been a big part of the recent Lucero sound—this is a record that takes its time, relying a lot on Rick Steff’s piano and organ to color in between the music’s straight lines.

That’s not to say that Nichols avoids hooks, or that the songs don’t still stick in the head. But All A Man Should Do tends to dwell on minutiae rather than stacking up big ideas or power chords. It’s filled with slight, sweet, backward-facing vignettes like “I Woke Up In New Orleans” and “My Girl & Me In ’93,” which speak plainly and soulfully about what it’s like to be middle-aged and on the move—taking in the sights while pining for home.