Slant Magazine: 'All A Man Should Do' Review | Lucero

Slant Magazine: ‘All A Man Should Do’ Review 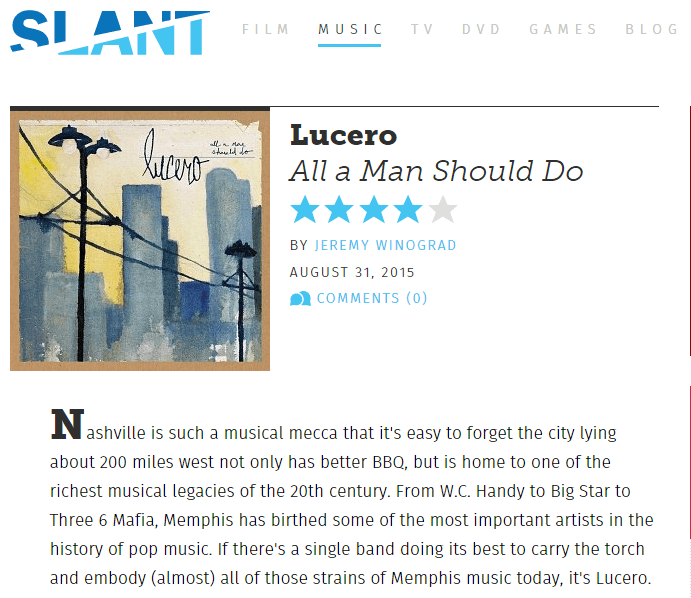 Nashville is such a musical mecca that it’s easy to forget the city lying about 200 miles west not only has better BBQ, but is home to one of the richest musical legacies of the 20th century. From W.C. Handy to Big Star to Three 6 Mafia, Memphis has birthed some of the most important artists in the history of pop music. If there’s a single band doing its best to carry the torch and embody (almost) all of those strains of Memphis music today, it’s Lucero. Over the better part of two decades, they’ve excelled at everything from tear-in-your-beer twang to straight-up Memphis soul, a range made cohesive by frontman Ben Nichols’s whiskey-soaked rasp and hard-drinking-ramblin’-man vulnerability. And on their eighth album, All a Man Should Do, they encapsulate a broader purview of Memphis’s influence, and their own stylistic capabilities as a band, than ever before.

The album includes a cover of Memphis power-pop band Big Star’s classic “I’m In Love with a Girl” (the album’s title comes from a lyric in the song), and Lucero recruited the band’s drummer, Jody Stephens, to sing backing vocals to boot. Lucero’s full-band arrangement nicely fills in the gaps of the acoustic original, even if Nichols’s vocals, pitched an octave lower than Alex Chilton’s high wail, don’t quite measure up. There’s a poppier underpinning to many of these songs, expressed through electric keyboards and unexpectedly hummable vocal melodies, to songs like “They Called Her Killer” and especially lead single “Went Looking for Warren Zevon’s Los Angeles,” on which Nichols’s double-tracked vocal hook, rueful-sounding though it may be, proves to be possibly his catchiest earworm to date.

But these forays into greater melodicism don’t come at the expense of Lucero’s identity as heavily tattooed brawlers and balladeers. All a Man Should Do retains the big-band Memphis-soul instrumentation that defined their last two albums, namely a horn section and Rick Steff’s honky tonk piano, while at times returning to a style of songwriting guitarist Brian Venable calls “cowboy emo.” For a band that, for the last few years, has seemingly taken great pains to transcend their alt-country roots, it’s a bit surprising to find that the new album begins with a song (“Baby Don’t You Want Me”) that would have fit comfortably on 2002’s Tennessee. The band successfully melds its past and present, maintaining an emotional pathos without sacrificing the musicality that’s come to define much of their recent work. The renewed preponderance of slow, sad songs may mean that much of the album lacks the high-watt adrenaline of their last couple of efforts, but the downbeat style suits Nichols’s lyrics, which are particularly vulnerable this time around. Years of singing about women who broke his heart and drinking the pain away seem to be taking their toll. “It’s too late to change the path I chose,” Nichols croons mournfully on the quavering “I Woke Up in New Orleans.”

On the album’s second half, however, Nichols quits wallowing in regret and elects to do something about it. Midway through the album’s most soul-influenced song, “Throwback No. 2,” the track becomes more upbeat and Nichols begins entreating a girl to marry him. Complete with pounding Wurlitzer and a fantastic, emotive sax solo by longtime Memphis session man Jim Spake, this section of the song is one of the album’s most musically exhilarating passages. And considering the way Nichols usually sings about girls, his pleas are almost as shocking as it would be to hear James Taylor unleash a violent torrent of gangsta rap. Even on an album full of obvious nods to music of the past, Lucero manages to surprise.