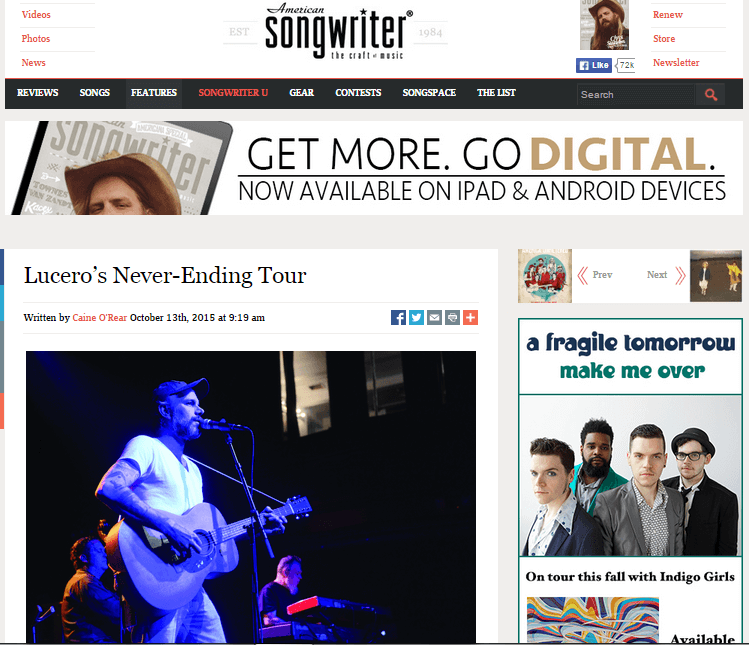 A Read From American Songwriter Magazine​ About ‘All A Man Should Do’ :

“The old feral fire is still there, as much as it was when I first caught their live act in 2006. And it’s mind-blowing to consider that the original line-up is still intact.” – American Songwriter
Check Out the Article Here: http://www.americansongwriter.com/2015/10/luceros-never-ending-tour/

I caught my first Lucero show in 2006. The band played Nanci Raygun, a storied hardcore punk club in Richmond, Virginia that has since closed its doors. The show appropriately veered more toward punk than country in sound and spirit that night, and found frontman Ben Nicholsdonning his best Paul Westerberg impression. The band had released seven albums by that point since forming in ‘98 and had amassed a sizeable following in Richmond. The show felt like a good hang among friends, almost to the point that it resembled a house show. Back then, in Richmond, you could still buy PBR in a can for a dollar in the Fan district. Those were the days indeed.

Lucero launched its tour for eleventh studio album All A Man Should Do in Nashville last month. It’s a record that muzzles some of the band’s raucous tendencies and finds Nichols mining more introspective terrain as a songwriter, but without compromising that beloved balls-to-the-wall spirit. Nichols has said this is the record he wanted to make in 1989 – what is it about that year? — when he was 15 years old, but it took “25 years of mistakes” to actually get it done.

The band recorded the new record in Memphis at the famed Ardent Studios, where Memphis legends Big Star recorded all three of their albums in the early ’70s. Lucero even covers Big Star’s “I’m In Love With A Girl” – the first cover song they’ve ever committed to an album – and it features Big Star drummer Jody Stephens singing back-up. It’s a fitting tribute to a band that still reigns supreme as the spiritual godfathers of independent music in the River City. All A Man Should Do is part three of a trilogy of albums, according to the band, that began with 1372 Overton Park, the first record that featured a horn section and marked a turning point sonically.

“This is a Memphis record in the greatest sense and a perfect finish to the three-part love letter to a city that brought us up and made us what we are today,” guitarist Brian Venable said.

Lucero has never tried to reinvent the wheel, and the new album is no exception. Like the novels of Jane Austen, the songs that make up the Lucero catalog are concerned with variations on a few themes, and in their case, the themes are women, work and whiskey. (Their 2012 album was titled Women & Work, after all, a term that Nichols confessed to being very Bukowski in its nomenclature.)

These themes still abound on All A Man Should Do, only this time they are looked at from the vantage point of one too many Sunday mornings that have come crashing down. The songs are about making peace with the life you’ve chosen, knowing full well that you can’t turn back. And their path is the long and winding road of a touring rock band, and its attendant occupational hazards, namely drinking and the difficulty of maintaining any semblance of a stable romantic relationship. Watching the show in Nashville and hearing the words to the new songs I was reminded of the Drive-By Truckers lyric, “Rock and roll means well but it can’t help telling young boys lies.”

The band is performing two sets on this tour, one acoustic and one electric, with an intermission in between and no opener, so be sure to get there on time. Much of the first set involves tracks from the new album, along with fan favorite “Texas and Tennessee,” a song off their 2013 EP of the same name that deals with a long-distance love affair but also unites the musical histories of the Volunteer and Lonestar states. Whatever regret about the night life is evinced in the songs of the opening set is non-existent in the second. This is the hard rocking portion of the show and features songs like “On My Way Downtown,” “Nights Like These,” and “Women and Work,” a high-octane number that boasts the lyric: “A honky tonk and a jack knife/ A tomahawk and an ex-wife/ Come on kid let’s drink ‘em down/ Kid don’t let it get you down.” It’s a call the crowd took to heart, as if it needed any encouraging.

When you consider how many shows Lucero has played in its time, and it’s not uncommon for the band to play 250 shows a year, you might forgive them if they seem a bit enervated from a decade and a half on the road. But amazingly, the old feral fire is still there, as much as it was when I first caught their live act in 2006. And it’s mind-blowing to consider that the original line-up is still intact. Of what other band of their longevity can that be said?

The crowd at Cannery Ballroom in Nashville was characteristically a sea of plaid-flannel, and heavily male. In fact, it would take seeing 1,000 Morrissey shows to match the level of testosterone present that night. “I dare anyone to try and not drink whiskey at a Lucero show,” my friend Tom said early into the second set. One look around the room and you saw he was right.